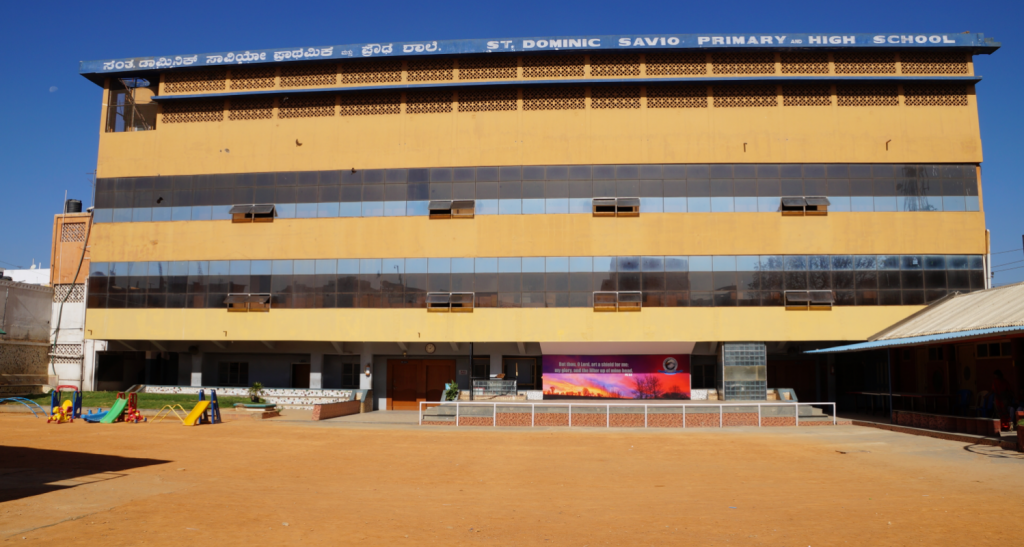 ST.  Dominic Savio School is located at Govindapura Main Road. It was founded in the year 1989 by Late Mrs. Celestine Balu & carried on by her son, Late Mr. Benedict Balu. Her youngest son, Mr. Celestine Raja Karier. B, is the current Chairman.

ST.  Dominic Savio School was birthed out of the desire to uplift the marginalized sections of our society and is committed to it to this very day.

Sports helps the student to be physically fit and active. Sports teaches tenacity. The ability to learn from the setback and move forward is a vital life skill. It teaches teamwork . Sport teaches discipline. It also teaches planning and execution. Our students see the benefit of sports from young age.

St. DOMINIC SAVIO SCHOOL gives priority to sports. The school has a volley ball field for boys and throw ball field for girls. It has an indoor badminton and Table tennis court.

We were honored to have National throw ball players to show case and impart their skills with the school team in an exhibiton match officiated by Mr. Martin National Refery.

Fencing
We are proud to host the first national Inter club fencing championship . Teams from Kashmir to Kanyakumari participated. It was well focused and energetic. The team from Kashmir won the First National Interclub Championship officiated by Rohit Gangadhar. Our chairman was awarded as the promoter of fencing in india on World Fencing Day.

St. Dominic Savio School invests a lot on cultural programs, because we believe that cultural activities is very much a need for the children to show case their talents. It brings out their creativity. It enhances the confidence level of the students, thereby allowing them to perform better. They are trained to present their skill fearlessly to the audience. These activities assist the students in shaping and developing their personality. In fact it helps them to focus, plan and execute.

A spacious and fully equipped auditorium with 800 seating capacity is being set up with ‘state of art’ sound and light.

Though our students are very quiet and calm they become energetic and their performance is flawless and perfect on stage. Its a different world. We are proud of their mesmerizing performance. They are indeed a class apart. Through their dance they touch the hearts of the audience.

We appreciate all the choreographers and our cultural team for their selfless contribution to see that the students show case their God given talent.

St. Dominic Savio School is well known for its science fair. It is a competitive event. The distinguishing characteristic of our science fair is that it employs scientific methods to test hypothesis. Our Students present their science projects in the form of a report, display board, or models that they have created. Students from primary , middle and high school are allowed to compete in science and technology activities. It helps them to work in groups and use their creative skills and ideas. The goal of a science fair is for students to answer a question based on theory. Students often work on science fair projects in addition to their school work. The experiments displayed by our students help to communicate the nuances of a project to the science fair judges, parents and visitors.

The School is located at Govindapura in Bangalore, near Manyatta Tech Park, and is easily accessible from all parts of the city. The institution is a multi-storeyed building and boasts of well-ventilated and spacious classrooms, a well-equipped science lab, a computer lab, a library, and a special play area for the kindergarten installed with sophisticated play equipment on a soft turf keeping the children’s safety in mind. It also houses an 800 seater auditorium and a large playground. Overall, the ambiance though fundamentally academic, is also co-curricular in nature, encouraging children to learn through the play-way method till they are ready to take on hardcore academics.

St. Dominic Savio School  library is a place where books and sources of information are stored.  There are thousands of books. They make it easier for students to get access to them for various purposes. As gateways to knowledge and culture, libraries play a fundamental role in our school.

We are one of Bengaluru’s most cherished co-educational schools for students from Nursery to grade X. The school established in the year 1989, has come to be symbolic of holistic education that aims to instil within its students, the love for knowledge for all those who deeply revere learning

A Registration form is the first requirement towards seeking admission. Forms can be obtained from the school office on any weekday between 9.00 am and 3.00 pm.